I can’t give it more than that, in fairness, as I’m not a regular and wasn’t really blown away by anything here. I do appreciate that they have a “ground beef steak” and eggs meal, which I love and don’t get enough, and everything was cooked well. The hash browns were impressive though as they were the perfect balance between crispy and soft.

Will I go there again? Yes, I would. And probably will since it’s next door to the motel I’m staying at on this trip. It was quality food and I’d be happy to give them more chances to wow me on future trips to Angels Camp.

Off the beaten path, but delicious! After frustratedly being unable to find the restaurant we were looking for in old town Angels Camp, I remembered seeing this place in our motel’s visitors guide and looked up directions on my phone. As we drove down the long, dark expanse that Angel Oak Dr. and then McCauley Ranch Rd. we were beginning to think Google Maps didn’t know where we were going again. But then we found it.

For a Saturday night it was active, but by no means crowded. We were seated right away. We’d decided against a different restaurant that boasted live music on Saturdays because I had a headache, so at first I was leary of seeing the live keyboard and sax players, but we were sat in a back corner of the restaurant far enough away from the speakers that it was still clearly audible but their jazz stylin’ was pleasurable as my headache subsided (thank you Excedrin Migraine!)

Anyway, the outlook was dicey at first… we didn’t see a waitress for 10-15 minutes, and when she did come over she went to a table that had been seated after us before us. Once she came over and we aired that we were a bit miffed at that, she apologized and the evening was delightful from there out.

We ordered the tempura battered asparagus appetizer, the hubs ordered prime rib, and I ordered fettuccine Alfredo. Delicious! We were pretty certain that the batter on the asparagus was not a true tempura batter at all and more of maybe a beer batter, but it was still good. The hubs liked the chili sauce they were served with and I was happy with the lemon aioli.

The hubs reported that his prime rib was perfect, and my pasta was perfect as well. I loved the bits of asparagus in the pasta and that the chicken in it was seasoned simply and didn’t overpower the light sauce and didn’t seem like an afterthought.

The little bread they brought to the table was cheesy and lightly garlicky, which I appreciate not being slapped in the face with garlic, and our desserts were good, but a little different. The bread pudding seemed to be closer to a cinnamon french toast – good in it’s own right, to be sure, but not exactly what the hubs was expecting. My vanilla creme brulee had a somewhat odd texture – almost more whipped than custard. If I had to hazard a guess I think it might have been made just with egg whites and not the yolks too, but the flavor was good. The bruleed sugar on top was a bit thick and a bit dark, but not burned.

The quality of the food was great, we’d go again when in this area, and it definitely made up for the lackluster lunch we had!

Once you’ve added the coconut milk, be sure not to boil it too long or else the milk may curdle. You can substitute yogurt or plain milk for the coconut milk for health reasons.  Thank you to Chacko’s Kitchen for submitting this recipe. 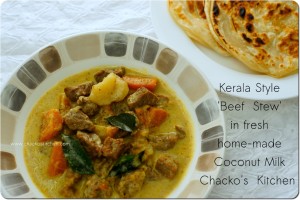 If you prefer the soup to be 100% Vegetarian, you can substitute vegetable stock for the chicken stock.  I prefer to serve with toasted sourdough.  A swirl of cream will make this look nicer and taste richer. 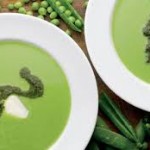